Harley is enjoying his vacation, but I am not.  It is getting close to two months since I have ridden my horse.  This is the longest that I have gone without riding since some of those long winters during college (I graduated over ten years ago.) and at the interim between getting married, moving, and finding a new barn to call my home.  This is definitely the longest since I have owned Harley.  I thought that I would still be able to have fun with my horse from my own two feet, but I have had to give up groundwork now, too.  My center of balance is completely out of whack and I cannot put on any of my barn shoes or boots due to foot and ankle swelling.  It is really gross, but "normal" in the world of pregnancy.  My husband and I went to K-mart and bought men's Wellington-type boots so that I can at least visit my horse in something besides sandals.  I would not be able to reach down to lace up my regular boots even if I could fit into them.  My existence is very strange and foreign to me right now.  I am an active person, but I cannot manage even a short walk without needing to use the restroom and I hobble around like a crippled person on my fat feet.  Needless to say, this has also made my job as a middle school teacher very, very challenging.

On a more positive note, Harley's dapples have arrived!  At least the stunning beauty of my horse's spring coat can lift my spirits.  He is just so gorgeous.  I know that I am biased, but every year his coat transformation is remarkable.  I documented it in detail last year.  Just choose the "buckskin" tag to see some more impressive photos from 2012.  He is pictured below partaking in his favorite vacation pastime.

A Rider's Seat Gone and Realized

A competent and effective seat is perhaps a rider's greatest tool in the saddle.  Sometimes the quality of the rider's seat is not obvious until things go awry.  For example, all may be well and good for a relatively well-balanced rider, until the horse spooks, takes-off, and drops a shoulder.  If the rider comes off over the descending shoulder, the seat was not properly installed on the horse.  The seat should be connected to the hind legs, not the shoulder, but this isn't always obvious until after eating dirt.

I have not been on my horse's back for six weeks now.  I miss riding him terribly, but I knew ahead of time that I would not be able to ride him at this point in my pregnancy (We have about a month to go!).  Our last ride was short, but wonderful and we spent most of the time in a smooth, steady canter.  The canter is Harley's favorite gait and it was definitely his idea to spend our last ride that way.  I also thought it totally appropriate that he requested to canter and offered a delightful rocking gait considering that he had a "baby on board".

My official reason for making that ride our last until later this summer was that I no longer fit in the saddle.  That was true, but it was not the only reason, just the easiest one to explain.  Leading up to that day, there were some hints that my saddle days were numbered.

The first hint was how I was using my hands.  As a dressage rider, I take great pride in "using" my hands very little.  Connection, straightness, and balance information are transmitted through the reins between me and my horse.  I do not use the reins for steering and it is rare that I have to truly "pull" on the reins (banish the thought, I know, but it does happen).  However, as my rides approached the first week in April, I started noticing that I was "using" my hands more and more.  I was starting to steer a bit with my hands and slow my horse down with a "squeeze and release" technique that I have taught to beginner riders.  The most dramatic case was in the canter.  I wanted to circle at one end of the arena and realized (with a certain amount of horror) that I had to haul on the inside rein to bring my horse onto the circle.  This was a very rude way to circle a horse who will follow my weight and take direction from my seat and legs.  The crude turn via my hands was an involuntary backup response, because apparently my seat and legs were not behaving as usual.  Harley obliged without a fuss, but I still apologized for my inferior technique.

The second hint was the use of my voice.  This was less noticeable to me as a clue that I would have to abandon the saddle, because I always talk to my horse when I ride.  I use the classic "gait" verbal cues as well as a couple of my own token sounds or sometimes I just talk to him, you know, like in English.  His ears are always back listening to me, which I greatly appreciate.  As our rides progressed with the second trimester, I realized that I was riding almost exclusively off my voice.  Harley would trot or canter from the sound of the word or a cluck or kiss and he came back to trot or walk when I asked him aloud.  This is not really a bad thing and it certainly doesn't hurt my horse or qualify as bad riding, but it was an indication that my physical aids were losing effectiveness.

All of a rider's aids work in concert, but the deal-breaker for me was the loss of my seat.  The seat is the keystone for the rest of the physical aids.  During our last couple rides, I literally could not sit in the saddle except at the walk.  Posting trot was delightful exercise and I stood straight up in my stirrups for the canter.  I have been gifted with excellent balance, so I never felt unsafe, but the writing was on the wall.  I cannot use my seat if it is not in the saddle AND if I did sit to try to rebalance my horse, nothing happened.  I could not engage my core to regulate my horse's pace (hence the "squeeze and release" on the reins), I could not control the shift of my weight to turn (hence my man-handling of the inside rein), and I could not support or initiate a half-halt.  Our last canter was glorious, but it was also all Harley.  He took me for a nice ride.  I was a complete (albeit well-cared for) passenger.  I tried to offer some input at one point and realized exactly how ineffective my seat and aids had become.  My abdominal muscles were so stretched out and without anywhere to go when I needed them to contract and support.  Without my abs, my back muscles were also unsupported and the stability of my torso at risk.  Neutral pelvis started to fade away.  It was not lost on me just how lucky I was to be riding a kind horse who had no intentions what-so-ever of taking advantage of my current short-comings in the saddle.  I was most definitely vulnerable, even if I still felt secure and safe.  I did not want to risk riding into uncertain territory and even the best horse can react unpredictably.  Those of us who have been riding and working with horses for a long time know this truth through and through.

So I patted and hugged Harley.  I thanked him for an outstanding ride and called it quits.  It killed me to do that and it took several weeks to admit definitively that I was no longer riding (I kept telling people that "I thought" I was done riding for now).  I appreciate that no one told me to stop riding before I quit on my own, including my husband.  He waited for me to make the decision and trusted that I would know when to say "when".

There are many silver-linings here, getting to meet our daughter in a few weeks being the greatest one.  The other is the realization that in losing my seat as a rider, I learned just how much I used it before.  I always hoped that I rode from my seat and that my seat was effective, but it was not until my seat was immobilized that I could be certain of its worth.
Posted by Val at 5/18/2013 09:25:00 AM 13 comments:

Instant Gratification in a Shedding Blade 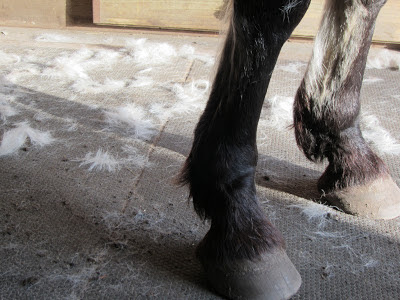 It doesn't matter how many times I have traversed shedding season, I am always amazed by the amount of hair that falls away from my horse.  A lot of times, I just use a small hard brush to groom hair from the Brillo pad that is his winter coat, systematically removing the hair from the brush and transferring it to the garbage can as I work from his neck to his hindquarters.  But at some point, there is so much hair that my brush becomes stuffed with hair in just a few strokes.

I don't know what it is, but the shedding blade is a ridiculously satisfying grooming tool.  Harley enjoys the nice scratching massage that he gets from the small teeth of the blade and the hair flies from his coat like a scene from Edward Scissorhands. 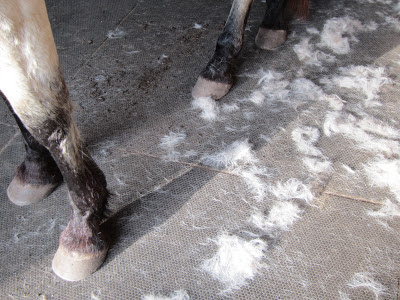 These pictures were taken a few weeks ago.  Harley has lost a lot more hair since then, revealing some of the short, satiny hair of summer.  I can see lots of reddish hairs mixed in on his neck and shoulders.  Do you know what that means?

The dapples are on their way!

Harley is living the easy life these days: extended grooming sessions, hand-grazing, and carrot-time at the picnic table.  I try to get in an exercise session a couple times a week, but, honestly, he seems to be handling the down-time just fine.  In the six years that I have owned him, he has not had a long vacation and during this time of year I would probably be riding him as close to four times a week as my schedule would allow.  I hope at least one of us is enjoying it, because I am still gazing at his back longingly and wishing I were up there.  Wouldn't it be nice if you could just remove your pregnant belly for a few hours and put it back on later?  My bladder would sure appreciate that.  ;)
Posted by Val at 5/04/2013 09:01:00 AM 13 comments: