Recently, I conducted a little helmet research.  I visited a couple reputable sites and learned that the life of a rider's helmet is about five years or one fall from a horse.  Since I have been riding Harley lightly this spring, I determined that a new helmet was most likely in order.  I figured that my helmet is probably about five years old by now and should be replaced.  So I checked the date of manufacture on the inside of my helmet and was surprised to see these numbers:

It looks like my trusty helmet has surpassed its life expectancy, which is not entirely a good thing.  While it does mean that I never bit the dirt in my buckskin-colored helmet (a very good thing!), it also means that the years of heat, sweat, and grime have taken their toll and possibly left my head not as well protected as it should have been while astride my horse.  I probably bought that helmet some time during 2007, during my first year with Harley, so although it may not have survived seven years exactly on my head, it has certainly been a part of me for more than five.  With this revelation, I embarked on a new helmet search.

My priorities for a schooling helmet are simple: safety, comfort, and room for my long hair.  I selected my last helmet, because it had an adjustable fit and a "pony-tail port".  This was a wonderful solution to the problem of having one's hair get tangled in the helmet dial.  While I like the option to minutely adjust the fit of my helmet, there are some really nice helmets out there that do not have dials and I am not exactly sharing my helmet with anyone, so I branched out to some brands that I have never worn before.

I decided to give the Tipperary Sportage a whirl.  I selected size medium in navy blue and waited axniously for my new helmet to arrive.  In less than a week it was in my hands and on my head in the kitchen.

My first impression: I love it!

The helmet was comfortable and fit my head right out of the box.  No adjustments of the padding were necessary.  Although the helmet lacks a pony-tail port, my hair can be secured just below the helmet with no problem.  I love how this helmet covers more of the back of my head and fits snugly, but without pressure points.  It almost feels like I am wearing a pillow on my head.  Seriously.


With two rides under my helmet, I can honestly say that my first impression is sticking.  I think this helmet is more comfortable than my last one ever was, even when new.  We will see if I miss the larger visor when the sun is high, but, so far, I am really liking my new "head pillow"!

Harley turned sixteen years old and Sweet Pea turned ten months old on the same day!  We celebrated with a barn visit and carrots.  Thankfully, the weather was beautiful.  I tossed carrots to Harley while Sweet Pea giggled with delight as he gobbled them from his feed tub.  It was almost a game of fetch, except there was crunching instead of retrieving.  After the snacks, I walked around the farm, visiting and taking in the fresh air.  We have been stuck inside quite a bit this winter, so that was a very nice change.  When we returned to Harley's paddock, he reached his head and neck over the fence to commune with us.  Sweet Pea reached out a little hand to touch his face after watching me pet his nose.  Harley dropped his head and let her feel his long, sun-bleached forelock, which she thought was very amusing.  She tested his hair with a little tug.   Harley didn't move a muscle.  We stayed and petted him for a while before returning to the car.  It was very enjoyable.

Which Sweet Pea was having her fun, a couple times Harley made eye contact with me.  I could almost hear him saying that this is not how we normally spend our time.  Normally we groom for an hour and then tack up and ride for another hour.  More time would be spent untacking, grooming and grazing.  Gosh, I used to spend hours at the barn, any day of the week, any time that I wanted (almost).  A lot more planning and prep goes into my barn visits now, and obviously if Sweet Pea tags along, Harley and I stay on opposite sides of the fence, but at least he gets attention and carrots and Sweet Pea is getting some early lessons in how to be around horses.  I had to wait until I was seven years old and beg for months before my parents agreed to some lessons, so she is very lucky by my standards.

Speaking of riding, guess who rode for the first time at eight months old! 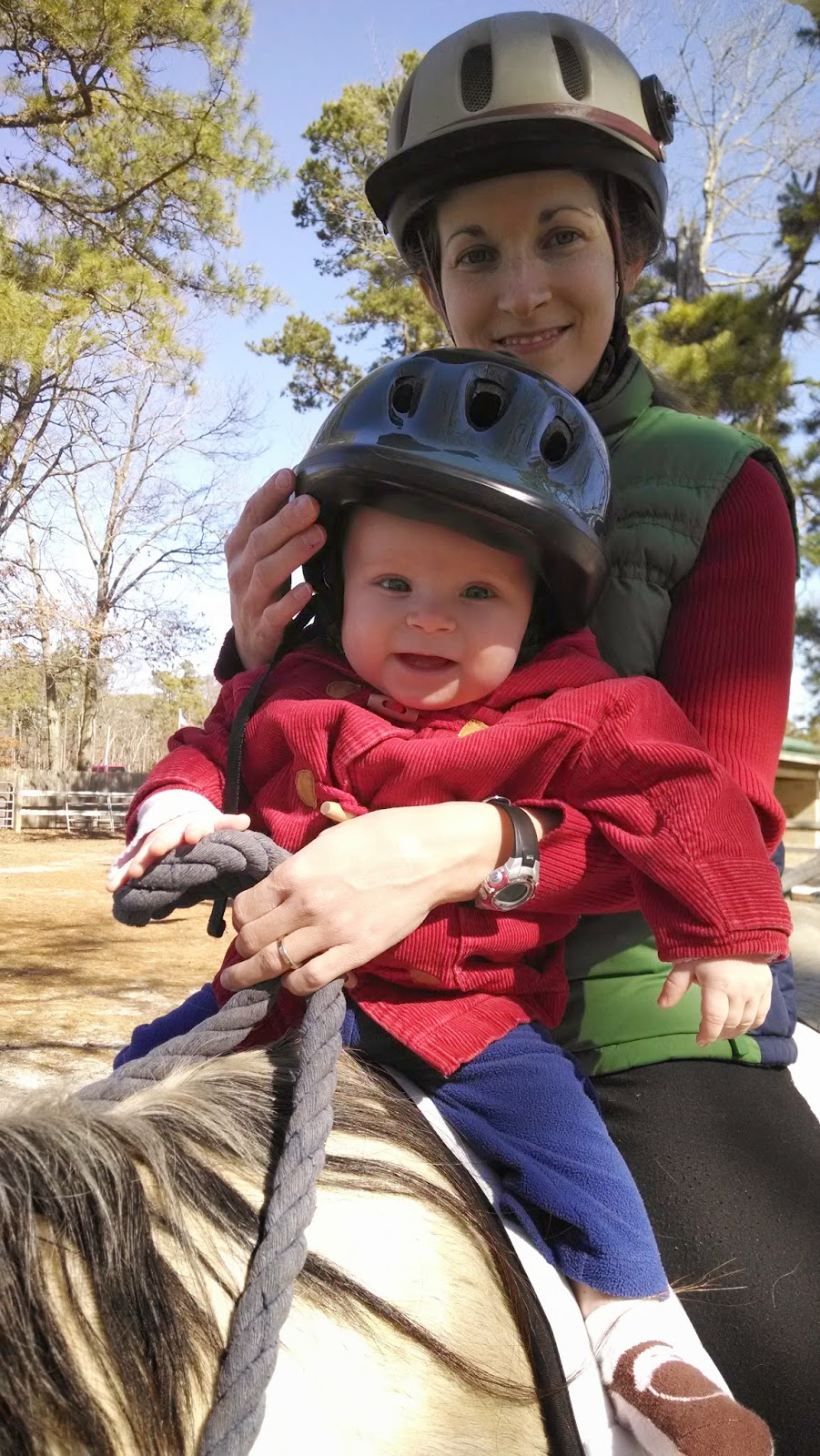 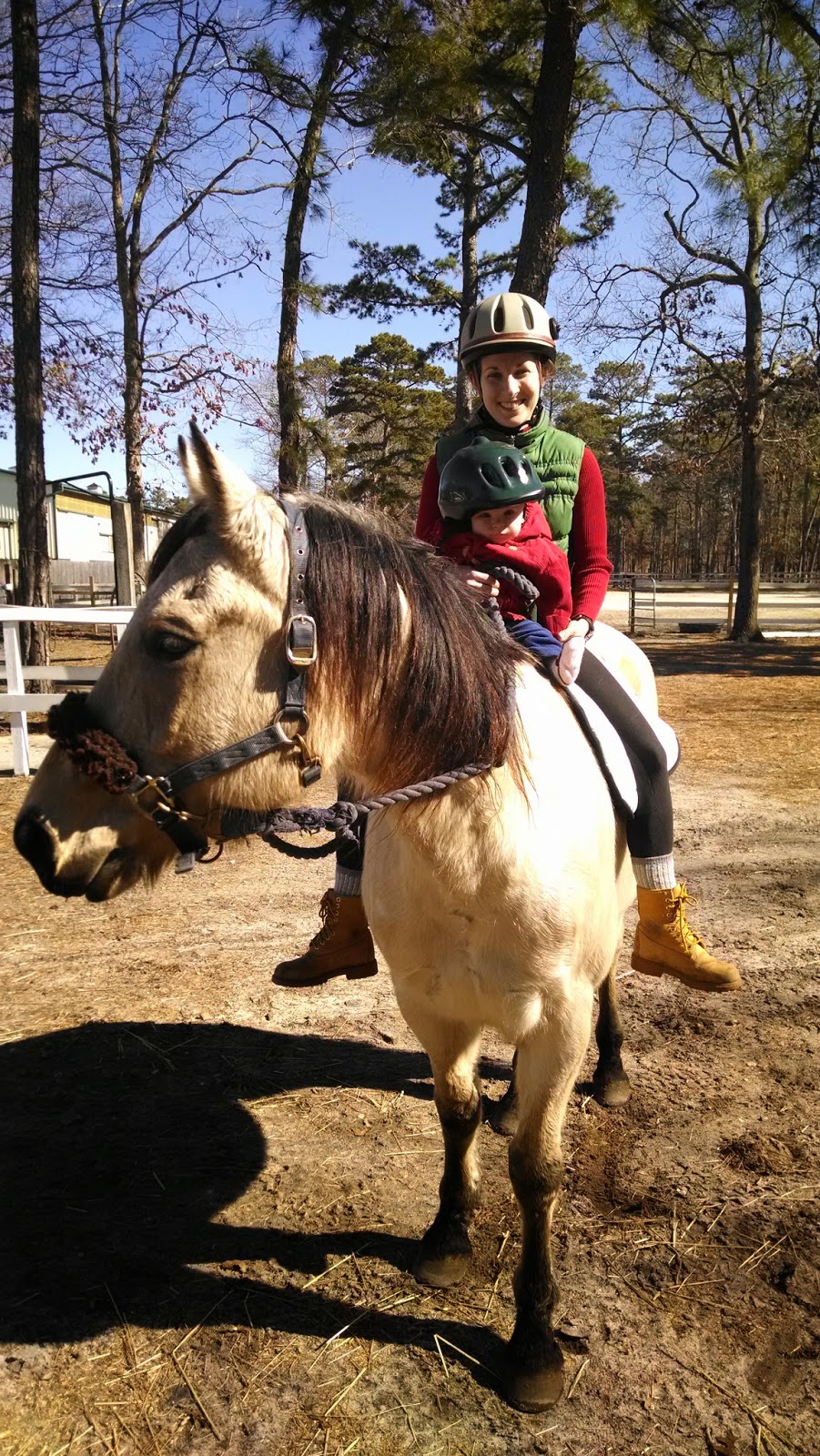 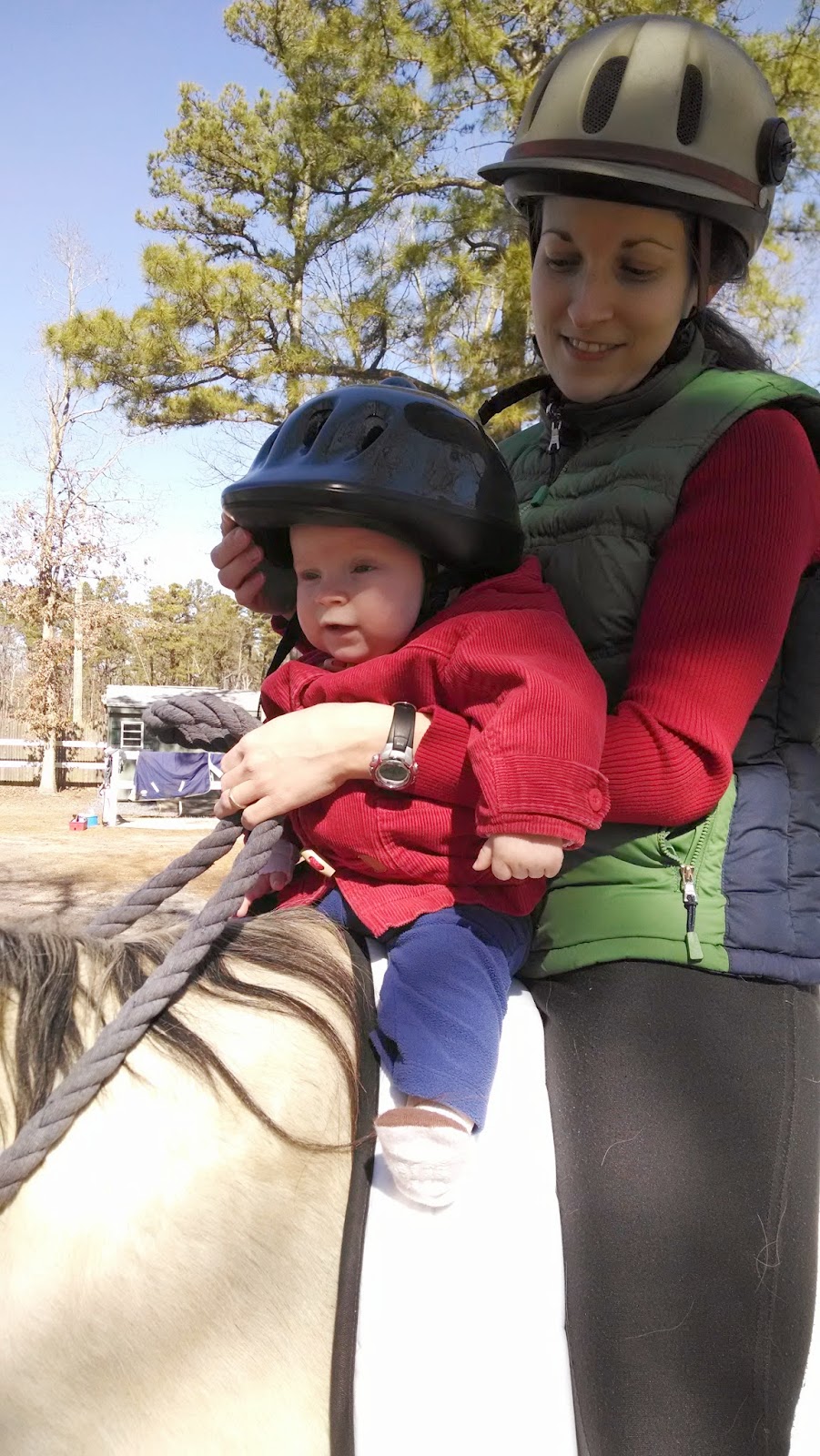 I hope to repeat the experience again (and again).  Harley, Mommy, Daddy, and baby all have to be available and willing and the weather has to cooperate.  This first ride was spontaneous.  Harley was feeling good, the day was warm enough and my husband happened to bring Sweet Pea along for a barn visit.  Harley was excellent.  So patient and slow.  He didn't mind when SweetPea started babbling excitedly.  She loved it.  So did I.

And I got to ride, too. Yesterday, I rode Harley for twenty minutes at the walk. Even though we were only walking, I tried to relish the chance to move around. I challenged myself to ride from the middle of my horse and my body. I encouraged his posture with my own.  I tried to imagine him staying round and balanced as we circled, turned, and took a few steps of shoulder-in. The reins stayed pretty loopy, but my horse moved with a nice soft arch over his back and neck.  His muscle memory was intact, even though we were both out of shape, to say the least.

Then I asked for trot.  We had a false start with some coughing, but then he zoomed off and I had pay attention and sit up, because he was so energetic.  He felt great!  We only trotted for a couple minutes.  A few circles in each direction.  His tempo was very erratic but he was stretching to the bit eagerly and thoroughly enjoying pushing off in trot. I forced myself to keep the trotting under five minutes by watching my clock.  No sense in ruining a good thing or over doing it.  I loved every minute.