I have been busy.  Do you want to know how busy?  I haven't ridden Harley in six months.

Except for a couple short walks in the yard or through the woods, we have not been riding.  At first this was because my schedule is insane.  I am a new Mom and I work full-time.  My husband and I live a juggling act right now.  Many of my barn visits this winter were in the dark.  Once or twice I stopped for a couple moments and caught a gorgeous sight: the stars over my horse's head, bathed in moonlight.  It was stunning and made me realize just how fast I have been moving and just how much my life has changed over the past year.  Some of it has been the most wonderful moments of my life, some utterly stressful, and others have been sad.

You see, for a while now, my lack of rides on Harley cannot be blamed on my schedule.  Reality led to feelings of resignation.  My horse has a respiratory condition (coughing due to allergies) and there is not a whole lot that I can do about it.  I want him to be comfortable and happy, but I want other things, too.

I want to ride.

I love riding and nothing makes me happier than riding my horse.  Somewhere in October, I gave up riding him.  It was too upsetting to tack up and get on only to get off two minutes later because he was starting to cough.  More than once, I pulled his tack without mounting.  More than once, I left the barn in tears.  Eventually, it was easier not to try.  Of course, then the weather got terrible and no one was riding, so I just took care of my horse as best I could and tried to enjoy him as a pet and carrot-eating machine.  There were other difficulties that arose due to his respiratory sensitivities, but I am glossing over them for now.  Needless to say, it has been a really long winter.

And then last Saturday happened.

It was 60+ degrees and I decided to sit on my horse with just a saddle pad and his bridle.  I have been hopping on his back in just a halter now and then for short walks, because I just missed it so much, but this time I decided to take down his bridle...

...We walked around for a bit and I got the idea to ask for some leg yields (this is part of my motivation for riding in a halter.  I can't resist doing more).  I shortened my reins a little and started to apply my leg and just like that we were trotting!  I started to laugh and then remembered that I was not riding in a proper bareback pad.  I asked Harley to walk and told him how happy I was that he wanted to trot, but that I had asked for sideways.  We went back and he gave me the leg yields eagerly.  To the left was super easy.  To the right was crooked, but I could not have been happier.  Harley was in my hands a bit now and I could feel the impulsion brewing even though we were only walking.  He was begging to trot.  All he needed was a whisper from me.

I let him trot and he stopped abruptly in a mild coughing fit.  I patted him knowingly, not wanting to go down that path of disappointment, but then he stopped coughing and I felt the energy bubbling up again.

I am weak.  I just can't resist the feeling of riding my horse.  Of thinking together, moving together, and sharing happiness.

After a couple tiny trotting spurts, I had a tough time convincing him that that was all we were doing, so we left the ring and walked around in the yard.

Cue snorts of happiness.  (from Harley,  not me)

My horse is not fit.  He is not 100% healthly (although he is totally sound of limb) and I am not sure what level of activity or fitness he can manage.  He has good days and bad.  But maybe, he is not quite ready to stop riding. 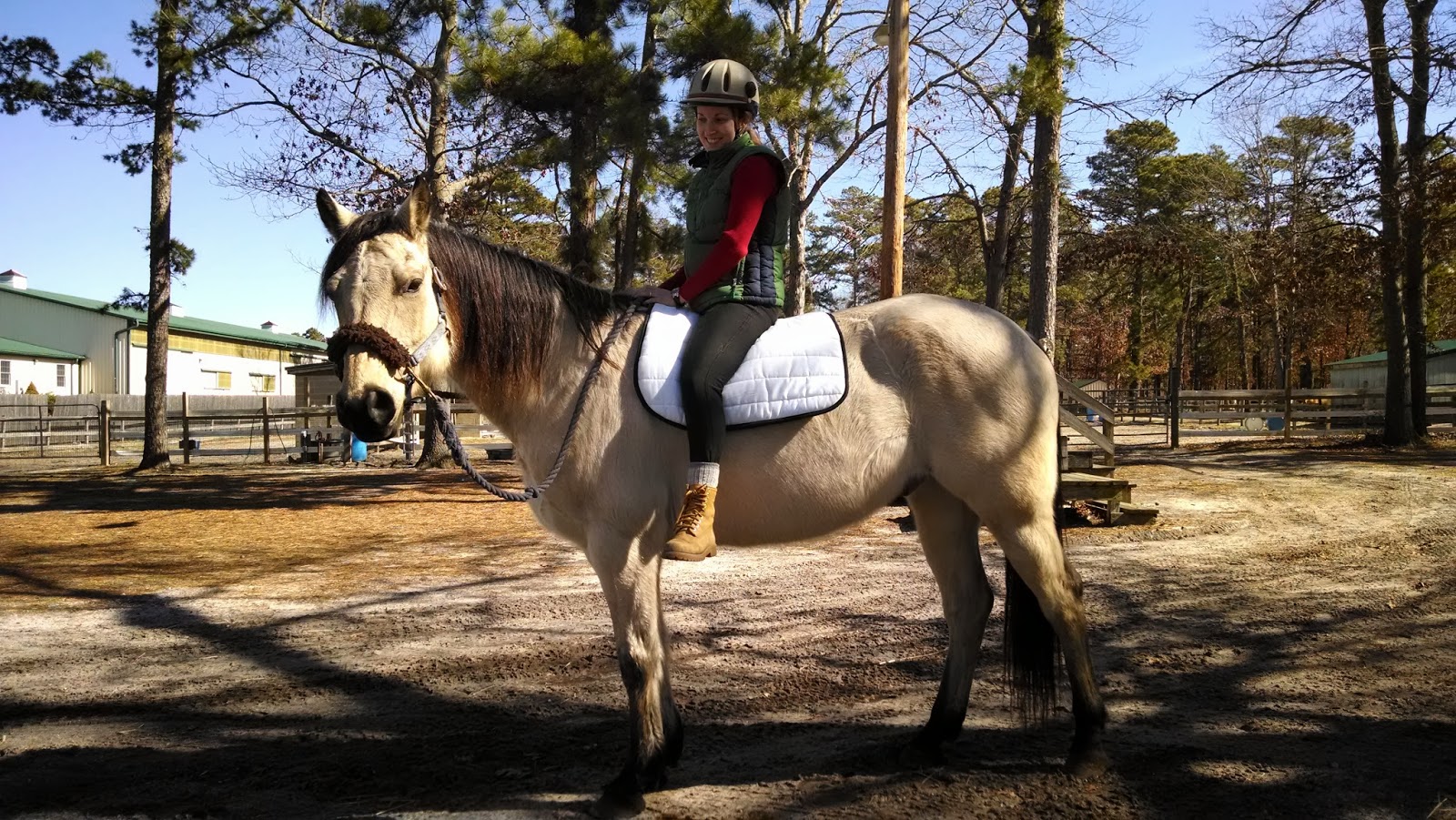 There are few things in this world that I have loved as long or as unconditionally as I have horses and riding.  When I was in middle school, there was a period of time where I could not take lessons, so I improvised.  My Oma lived near two older, Arabian ponies, the very same ponies that I first touched and sat upon as a three-year-old child.  I brought my brushes and a lead line and (with permission) gave those old horses the grooming of their lives. After a couple visits, I grew tired of just brushing them.  Obviously, I wanted to ride, too.  I poked around the barn looking for a saddle or bridle, but there wasn't much to be found.  I vaguely remember a dusty, Western saddle, which I could never have lifted at the time, and a loose bit hanging on a hook, but this was far from workable gear. So I did what any determined, horse-crazy girl would do; I decided to ride without tack.

First, I tied my lead line to the gelding's halter.  I wanted to ride him, because he was the more feisty of the two.  I saved the mare, the sweet Littlebit, for my sister to ride, if the experiment went well with King.  King enjoyed being brushed and fed carrots, but he wasn't completely on board with the whole riding thing.  He probably hadn't been ridden in a good ten years and did not show signs of missing it.  It took some coaxing to get him to stand on the low part of a slope, so that I could climb on.  I had never mounted without a block or a stirrup, so my first attempts were very awkward and probably hilarious to a bystander.  I wonder if the owners could see me from their house?

Once on King's back, I was cautious.  I patted and talked to him, trying to show the old boy that I just wanted a little time on his back.  I must have gotten on him a dozen times and just stood there, content to just sit, but eventually I wanted more.  One day, I took the lead line-reins and turned King around. Then I gave him a little nudge with my heels.  Unsurprisingly, he wouldn't move.  I tried several times, each time more insistence.  King had obviously mastered the stubborn pony routine long ago and was not the least persuaded by my efforts.  After careful thought, I formulated a better plan.  I slid off his back and walked him by hand away from the paddock gate and the mare (who was actually his sister).  I positioned him on the low part of the hill, so that I could (more) easily hop onto his back.  I knew before I got on, that my plan was going to work.  Suddenly, there was life in the old horse's eyes and a new anxiousness.  He wanted to be back at the gate.  I grabbed mane flung my leg over and clucked.  My pony cantered up the hill eagerly and stopped at the mare.

I had done it! I had ridden King without a saddle or a bridle and survived!

And so began many happy visits where I rode King up the hill to his sister.  I dare say, he grew to enjoy our short jaunts, because he became less and less ornery.  I was even able to ask him to wait for my signal to run up the hill and later on, I was able to steer him around the paddock in his halter. He did try to buck me off a couple times when I urged him to walk away from his sister, but thankfully my young legs were wrapped tightly around his barrel and my butt never left his back.  I always rewarded him with carrots when he was compliant and eventually I had my sister riding the mare, so walking away from her was no longer a problem.  I learned a lot from those short, bareback rides and I think of them fondly.

I was reminded of what it is like to ride in a halter a little while ago.  I had not sat on my horse in many, many weeks.  I looked at his blanketed back and the thick rope lead line.  I looked at Harley and asked, "Are you up for a walk? " 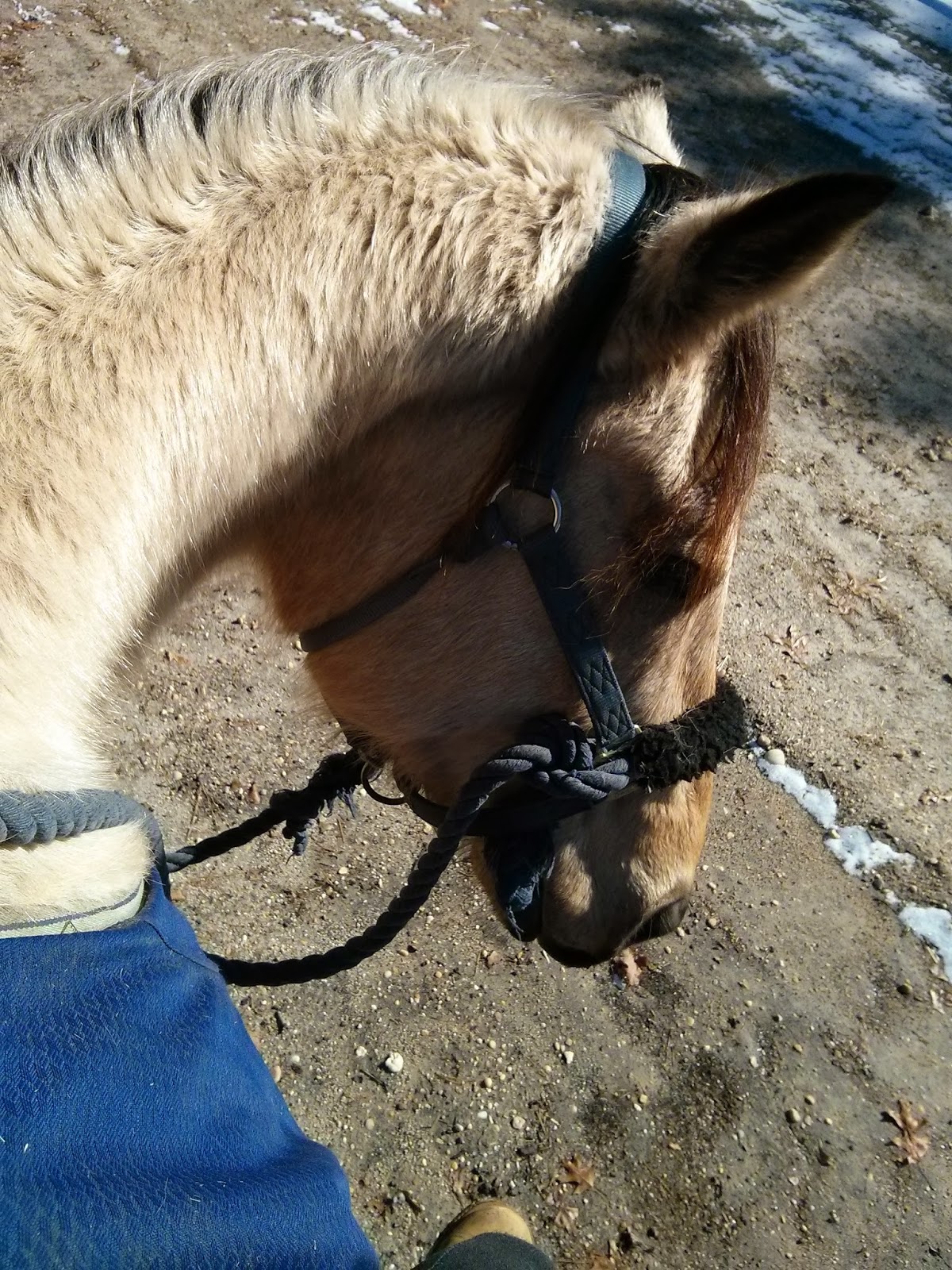 Thankfully, he was.  I felt like a kid riding my pony again, but without any anxiousness about how he might behave, because this was Harley, and I knew he would be a good boy.  We walked around the yard and the riding ring, paying visits to the other horses and just enjoying one another's company. Harley snorted with happiness and I felt that twinge of excitement at being on my horses back tackless.
Posted by Val at 3/01/2014 08:44:00 AM 14 comments: