"Hi.  My name is Val and my horse has allergies."

Detail-oriented readers may have noticed that I have mentioned here and there that my horse has allergies, but I have never written very much about it.  There is a reason for this.  I have been so worried about his allergies, that I have been too paranoid to even write about them.  I was also worried that his treatment would not work or that he would fall into the tiny percentile of individuals who have an adverse reaction to immunotherapy.  Yesterday, we reached the twenty-second injection of Harley's treatment and I finally feel confident enough to write about the experience.  My hope is that this post may be helpful to someone else facing a pet with allergies.  There is no cure for allergies, but now I feel that there is hope!

Truth be told, I have always suspected that Harley had a little bit of seasonal allergies.  Each spring, while I was helping him shed his thick, winter coat, he would kind of "whoof" and sneeze a few times during our grooming sessions.  Since these symptoms were short-lived (a few weeks) and never escalated beyond one or two snorts, I did not worry.  I still noticed it, though.

Fast forward to this past November (2011).  In an effort to help my hardkeeper maintain weight over the winter, the barn owner and I decided to keep Harley in his stall at night, even though he had been on 24/7 turnout for the past three years.  This lasted about three weeks, and then he started coughing and we threw him back outside with a blanket.  I thought the problem had been averted, but that seems to be the starting point.  Come December, my usually healthy horse developed some sort of illness and his legs swelled up alarmingly.  Blood-work showed that he had suffered a virus, but I cannot help wondering if it was really a huge, allergic response.  Follow-up blood-work showed no secondary infection, but he had started to cough: in the cross-ties, in the paddock, and under-saddle.  With my consent, the vet ordered a full spectrum of allergy testing, which was not cheap.  Not in the ball park of thousands, but definitely a round of hock injections, for comparison.  The results came back several weeks later revealing that my horse was allergic to at least twelve different things, tree pollen being at the top of the list.  It seems that the warm winter and temporary confinement in his dusty stall had aggravated the allergies, which had only caused mild symptoms in the past.  Suddenly, I was faced with a horse with a respiratory problem.  A soundness of wind, problem.

In the past, I had read about COPD (Chronic Obstructive Pulmonary Disease, now called RAO (Recurrent Airway Obstruction) so as not to confuse with human COPD), also called "heaves" or "broken wind", and my vet told me that allergies which manifest as a respiratory response can develop into COPD/RAO if not managed properly.  To say that this shot a cold, hard spear into my heart would be an understatement.  Just watching a few videos of horses struggling to breathe on YouTube makes me cry.  If something could be done, I was prepared to do it, so my vet explained the rational behind immunotherapy or allergy shots.  The biomedical laboratory would formulate a serum of all the antigens which elicit an allergic response in my horse.  The serum would be given to my horse by subcutaneous injection, beginning with very low volume "challenge" doses until the highest concentration dose or "maintenance dose" was reached.  The antigens in the serum "train" the immune system so that the white blood cells, which normally handle viral or bacterial infections (Immunoglobulin G (IgG)), mount an attack against the allergens before the white blood cells responsible for allergic reactions (Immunoglobulin E (IgE)) can have a go.  Apparently, IgG responds faster than IgE and should effectively prevent a strong allergic reaction.  I believe this is also called "tolerizing" the immune system.  If the allergens are in my horse's bloodstream all the time, they are not seen as foreign.  This is an oversimplified explanation, I am sure, because receipts of organ transplants have to take anti-rejection drugs for their entire lives, which contradicts the "tolerization" reasoning.  Immunotherapy is nothing new.  Many people receive "allergy shots" for seasonal or pet allergies.  People who have life-threatening reactions to bee stings often receive immunotherapy as a preventative life-saving measure along with the immediate response EpiPen.

My vet explained to me that immunotherapy does not usually completely stop symptoms like coughing, but it does reduce them and may prevent progression of the problem to COPD/RAO.  That was enough for me.  I am all about treating the problem, not the symptoms.  I do not want to just give my horse steroids, so that I can ride him.  I want to give him the closest thing to a cure that I can.  Since there is no cure for allergies, immunotherapy is just that thing.  Work with the immune system and hope that science comes through for us.  So when my vet asked if I would be comfortable administering subcutaneous injections, I did not hesitate with my answer:

I had never given so much as a Banamine injection, before last January.  Since then I have given a ten-day round of intramuscular steroid injections and twenty-two subcutaneous injections.  I have made a few mistakes, like piercing his skin through the "tent" twice and watching the serum leak onto his fur.  Oops.  But, thankfully, Harley is an excellent patient and being a former laboratory chemist, I have better than decent fine motor skills and practice with vials and pipettes.  My vet showed me the safe triangle of muscle on his neck and how to give my horse a warning that he is about to get sticked.  For as sensitive as he is, Harley rarely budges and stands without a handler in the cross-ties.  I truly believe that animals know when you are trying to help them.  He appreciates the carrot or cookie afterward.  Of course!  Don't little kids get a sticker or lollypop?

So the big question is,

I think the answer is "yes".  He coughs infrequently and a strong coughing fit (walking backwards and curling up his neck) is now rare.  He is very rideable, with a few coughs in the warm up, but these are not always even present.  Warm, humid weather, ironically, seems to be our friend.  Dry, dusty conditions are definitely our enemy as is pollen season and very cold, dry weather.  Harley absolutely must lead in a trail ride, because dust kicked up from a horse ahead of him reliably sends him into a coughing fit.  Being in the lead suits him just fine, so this is hardly a negative effect for us.

I have tried to combine his immunotherapy with other support like a breathing supplement with MSM and herbs that benefit respiratory health (which he, unfortunately, just decided that he doesn't like anymore), 24/7 turnout, and watering his hay and stall bedding, as he eats his grain in his stall twice a day.  Watering the stall seems to help cut down on coughing during mealtime, but we had to give up watering the hay, because it was creating a stinky bog in the paddock.  I have not noticed a difference in his symptoms before and after watering the hay, so I guess it was not really necessary for him.  I do my best to reduce his exposure to dust by keeping him outside during any aisle sweeping or stall cleaning and not riding him in the arena when it is very dry.  I have noticed that he will cough in response to chemical smells like diesel fuel and tarry hoof applications, so I keep him away from those things.  My teacher also showed me how to encourage him to stretch his neck when he coughs rather than curl it up and lean back, as she says that body posture is closing his airway and making it more difficult to for him to cough productively.  Her suggestion must make him feel better, because he usually stretches his neck now when he needs to cough.  To his credit, he does not panic during a coughing fit and will try to lower his neck when he feels me tug on his halter.  He seems to have good coping skills.

Last week I had two cough-free rides.  One was the horse show in the rain, so I guess that is a positive for an otherwise dreary day.  The other was a very humid schooling day.  He did cough once, but it was two-thirds of the way through the ride.  I was concentrating so much on what we were doing that I actually forgot that he had allergies until he let out one little cough.  I could not have been happier.  In January and February, there were a couple days were I actually had to get off his back after five minutes, because his cough would not subside.  I was in tears and wondering what was to come in the future.  That was when the vet started a round of steroids to get the inflammation under control.  I felt for all the bloggers I have read about who had trouble with leg or hoof lameness in their beloved horses.  I had to face it in a different form and my horse, thankfully, was sound of limb, but it was still heartbreaking.  At the time, too heartbreaking to even put into words.

August has begun, and I feel like I can finally breathe a little easier.  Hopefully, the immunotherapy is working and will continue to lessen his symptoms.  The real test will be the next pollen season.  Amazingly, the cough has not lessened his enthusiasm and he remains my wonderful riding partner, eager to learn and try every time.  I just cannot believe what this horse does for me.

Harley.  You are the best! 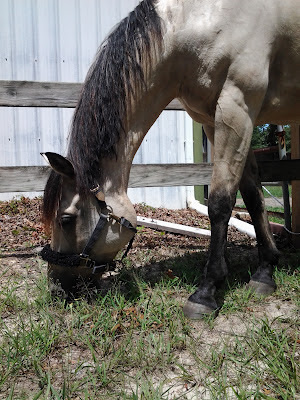