Dressage Show Reflection and A Gift

First, I would just like to say "Thank You" for the well wishes and support to those who commented and to those who, perhaps, just read and nodded at their computers.  I know that this was nothing more than a little schooling show, but I still got butterflies before we trotted up the centerline.  Harley had some show nerves, too!  Competition, by its very nature, puts us in a place of vulnerability.  Some people thrive on competition, some avoid it at all costs, and then there are those who fall somewhere in the middle.  I think that it is pretty safe to say that I am in the middle of the pack.  I can handle competition, I feel that it is good to put myself in that position once in a while, but it is not my motivation for riding and certainly not my main focus.

With that being said, I would like to share some history about my previous showing "career".  When I was in high school and college, I competed at First Level, again only at schooling shows a couple times a summer, but they were at much fancier stables than the shows I occasionally attend now.  Just to give you an idea, I once rode at the same show as Heather Mason.  She was most likely schooling a client's horse, but it is possible that we rode in the same class.  I do not remember the placings, but I did score a 66% that day and my (leased) mare was being a handful.  In fact, I regularly scored in the 60th percentile at First Level on two horses, a handsome gray, Appendix Quarter Horse gelding and a feisty, bay Hanoverian/Thoroughbred mare, both over 16 hands.  It seemed like there were plenty of 60's to go round.  I often rode both horses at the same show, and sometimes in the same class, which meant that I had to warm up two horses and manage two very different styles and personalities.  It was an excellent education, for which I am very grateful.

With one exception, I did not ride a Training Level test until I took Harley to his first show, where he scored a 58%.  Not bad for having been a pasture ornament less than twelve months before the show.  We trotted up the center line half a dozen times before we were able to break 60% at Training Level.  I like to think that I am a much better rider now than I was ten years ago.  I am certainly more tactful and aware.  There are also many groundwork skills that I knew nothing about ten years ago, or even five years ago.  With all the knowledge and experiences that I feel that I have acquired since owning my own horse, you would think that I could trot into that ring and score 70%!  Clearly, it does not work that way, but I am okay with that.

My former First Level mounts always scored 7's for their gaits and pretty much all the collective marks.  I scored 7's with them.  Sometimes, my mare would get lower marks for submission, but that did not prevent her from scoring an 8 during the test.  The gray scored 8's even more easily, as he was a well-mannered, honest horse.  Harley, for all his charm and good nature, scores 6's.  This is just the way it is.  When he scores 6's, I score 6's, too.  We pine after 7's instead of 8's.  This is frustrating.  I would be lying if I said that it didn't bother me, but I did not team up with Harley to become a great showing pair.  I love riding him.  I love what he has to offer me and our partnership, even if high-scoring gaits or movements are not in the cards.  It is okay.  I knew this going in to the show.

So, as you can imagine, I was completely tickled in May of this year, when we scored 7's for all of our collective marks for the first time ever.  It is also worth mentioning that we had not entered a dressage show since 2009.  Believe me, I was grateful.  The judge was very encouraging and congratulated us for moving up to First Level.  Even though our tests (First 1 and 3) were not without mistakes, we earned 64% and 61% respectively.

I do not think that my jaw could have dropped any lower.

Maybe she was an overly generous judge.  Maybe she was being lenient since we were at a schooling show.  Maybe she was captivated by Harley's wonderful "try" and my determination to believe in us and ignore our short-comings.  No matter what it was, I appreciated the opportunity to ride for her that day.

And then October's show came around.  A part of me did not want to enter, because I did not want to ruin the aura from our previous event.  I am not going to show forever.  One of these shows will be our last.  Maybe we should end on a high note and just have fun at home from now on.  Some nagging questions began to lurk in my brain:


I had to talk myself into going.  I told myself that those things did not matter.  What mattered was enjoying my horse, doing something different, and maybe learning a few things in the process.  I was rewarded for my efforts and for taking a leap of faith, but not exactly in the way you might think.

We were the only ones to ride at First Level, so we scored first and second place, with a 60% in test 1 and 61% in test 3.  I think that our "going out on a limb" is worth stating, because I was nervous to go out there and ride First Level tests for the judge, but I did it anyway.  I saw a warmblood, whom I know is trained to at least Third Level, in a training level class with a young rider.  There were also many other folks like me, on cute Arabians, Quarter Horses, and Paints, but I seemed to be the only one taking the First Level leap.  I was also one of the only ones without a trainer.

Sometimes you have to block everything out and "Just do it".

We scored 6's for all our collective marks (Oh well.).
We nailed a few 7's, for which I am particularly proud of the counter-canter, canter-lengthening,
and three square halts!  Those felt validating.

I was disappointed in our canter circles and transitions.  The circles are usually reliable 7's, but he was not very round or bending properly this time.  The left lead was crooked and on the forehand.  He also stiffened in the transitions, which have been coming so nicely at home.  I did not help him very much, as I was often getting too far ahead of the motion, detaching my seat, and sitting too far forward.  So it goes.

But...Harley scored many, many compliments for looking handsome.
Being cute never hurts.  ;)

And the judge told us and wrote in our remarks
that we have tons of potential.

I felt like telling her that I am over thirty, my horse is thirteen, and I am a full-time teacher without time or money to exercise our potential, regardless of how good her words were sounding.
I was a sea of vulnerability.

I worried that she thought we were younger than we looked,
just starting out,
eternal rookies.

Instead, I kept these things to myself, and then, she surprised me.

Since we were the last ride of the day,
she gave us an impromptu lesson.

A free, fifteen minutes with a dressage judge
showing us exactly what our potential looked like,
and proving to us that we could do it.

I was floored by the experience and by the judge's generosity,
which I would like to share with you.
Next time... 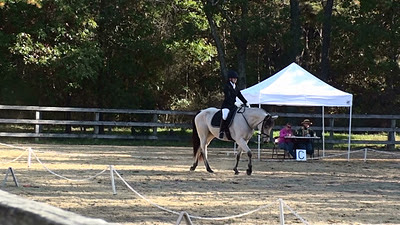