So after seeing some lovely moments of Harley from a year and half ago, I decided that if we really have improved in our relaxation, then we should have a test.  It is really easy to stay soft and relaxed when we are moving at a slow tempo and with a relatively long rein.  What will happen if I ask him to collect and add more power to his gait?  Will he be able to stay relaxed in the presence of positive tension?  How can I know if we are really more relaxed and focused if we do not go there?

After a nice, slow, relaxed warm up, I upped the ante.

For some reason I tried this in sitting trot.  I am not sure why; it just felt right at the time.  We were going around, pretty calmly and with a reasonable connection and then I put the pressure on.

I nudged with my leg.  Come on, Harley.

He responded by resisting and popping off the contact.  He was telling me that he likes this easy place.

So I asked again, this time with taps of the whip.  I bounced my outside elbow back, as my teacher has taught me, to help maintain a connection through the outside of his body.  I observed something interesting.  When I put my leg on to ask for more impulsion and pushing power, he immediately broke our connection by tightening and tossing his head, which allowed the energy to escape out the front.  Then he went back to our original tempo and energy level.  His balance and impulsion did not change.

Now I realized the problem.  Harley was avoiding my request.  Was he being smart and trying to make his job easier?  Was he avoiding the difficulty of the request, because he remembered being very tight and anxious in the past?  Since I was not sure, I proceeded with care, but I continued my request.

A tap, tap and a cluck.  My elbow caught the energy this time and I started to feel his hind legs in my hands.  We went back and forth like this a few times.  Sometimes I was fast and coordinated enough to keep the energy in the horse-rider system.  Other times, Harley tightened up and let all the power leak out.  When this happened, we had to begin all over again.

The task of adding power to our ride, became a challenge in maintaining softness.  I asked him to let his neck go, each time that he started to tighten.  With repetition I was able to anticipate when he was about to tighten and I could remind him to be soft before any energy was wasted.  The longer we were able to maintain our conversation, the more relaxed he was able to become even though he was moving with lots of animation.

Before long, my horse was on springs.  His trot became more difficult to sit as his hind legs pulsed against the ground before reaching up and forward, lifting his back with each step.  I could no longer swing along casually with the slow, relaxed tempo.  I found myself in a state of positive tension, my core muscles in overdrive, as I balanced in the middle of my horse, concentrating on keeping my legs from gripping and occasionally reestablishing the contact between my feet and the stirrup irons.

The contact in the reins felt much different.  There was more pressure, but he was not exactly leaning on me.  It was not a heaviness.  There was just another gear there and I was a part of the machine.  If I did not maintain my poise and my place in the circle, the energy would be lost just as easily as if Harley threw his hindquarters out or tightened his neck.  I realized my share of the responsibility. 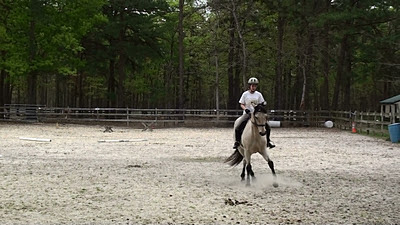 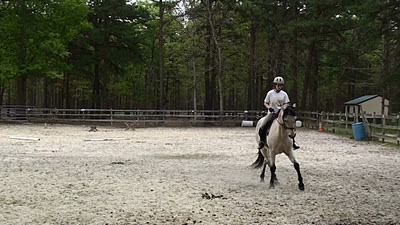 Canter transition?  The ground was lined with cotton.

I asked for a little lengthening and Harley's shoulders actually came up as he increased his stride.  The even crazier part was that I was still sitting his trot.  There was so much energy "in the system" that I no longer needed to tap with the whip or even use my legs.  I just directed it around the ring and changed gears with my seat.  Is this what my teacher meant my riding with intent and from your belly button?

I felt like I was riding a different horse.

Counter intuitive as it may seem, I felt like the only aids that I was using were my seat and my hands.  If I moved both my hands to the side, he turned or did shoulder-in depending on the position of my legs and seat.  If I lifted my hands up a little and held my seat, he collected more.  If I relaxed them down and relaxed my seat, he lengthened his frame.  If I wanted a transition, I just moved my seat like the new gait or halt.  If he started to tighten, I opened one rein and he released his neck muscles.  There was definitely muscular tension, in both of us, but we were still listening to each other and we were still relaxed, in a sense.

That was an awesome, awesome feeling, but we cannot do that every day.  I believe that I should not ask him to go like that for every ride or for extended periods of time.  I fear that this would wear out his enthusiasm and good sportsmanship.  We must keep our practice varied, so that we will be ready for our next power trip around the arena.