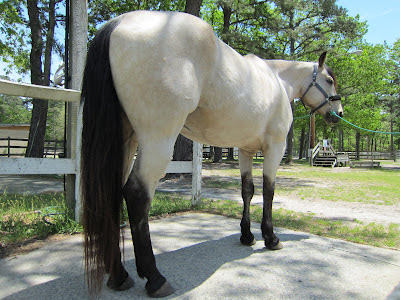 May is the month when Harley's dapples blossom.  The reddish hairs start to appear on his shoulders and rump first, cascading onto his ribcage and barrel shortly there after.  They are not dark or dramatic.  His dapples are subtle and intertwined like a red webbing, which stretches and recoils as  he moves.  His dark stockings are just about grown, reaching above his knees and hocks.  He has developed some more dark points on his withers and crest.  These dark points are more of a sandy color than the red on his hip and face.  There is still some soft fluff on his belly, but by the time I am posting this, the last wisps of his winter coat have just about gone. 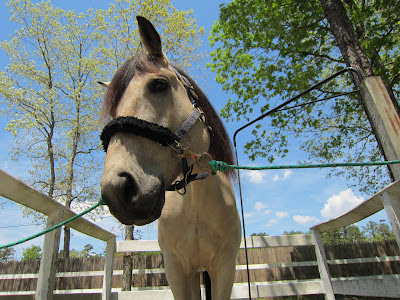 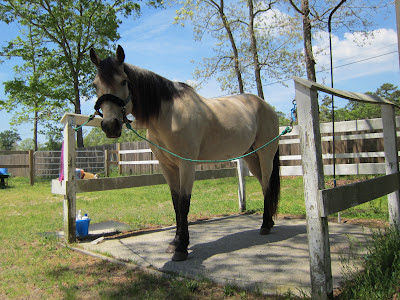 Later this day, Harley got his first shower of 2012 and shortly thereafter his first good post-shower roll.  A dirty horse is a happy horse, but I sure am glad that I decided to take these pictures first!  He was a good sport about it and smiled nicely for the camera for the last two photos in this post.  As you can hopefully see, his weight is looking very good this spring.  He is eating half a scoop less feed at each meal than he did this winter, but seems to have maintained pretty well.  Cold weather requires more heat generation and more energy consumption, so this makes sense.  I would say that he has dropped from a 6 to a 5 or a 5+ (and holding) on the condition scale and I am more than delighted with that for my hard-keeping Harley.
Posted by Val at 5/20/2012 09:03:00 AM