Harley's new boots arrived at the beginning of last week.  I knew that his feet needed a trim, so I had to wait until I had time to do his feet to try on the boots.  After a fresh trim on Saturday, the boots fit snugly, but were easy to install.  I tapped his toe against the ground a couple times to push the boot farther onto his foot.  Then I lunged him at walk and trot for a few minutes to see how he moved in them.  He walked and trotted very willingly and the boots were on his feet even better after that short bout of exercise.   I saddled up and decided to give them an official first ride.


The boots were a success!  Harley moved like he wasn't wearing anything on his feet.  He did, however, let me know that he was aware of his new accessories, because he reached down and chewed on the gaiter a couple times.  I think with practice he could learn to pull the velcro tabs, so I will try not to allow him to investigate them.

I must admit that I was a little apprehensive when I first started riding.  I wasn't sure what would happen if the boots fell off mid-stride.  Cantering and a ground-covering trot were the most nerve-wracking tests for me.  Both of these gaits were fine, but I was definitely a little nervous when Harley decided to open up and strut his stuff in trot.  His shoulders lifted and he floated along with no problem at all.  The only time that I even noticed he was wearing boots was in the walk and trot warm up.  Occasionally, I heard his hind toe hit the bottom of the boot on his front foot.  Due to his somewhat long back, he has never been one to overreach, but he does track-up nicely.  I think the little extra height created by the treads in the boots was making the difference.  The intermittent, soft knocking sound only happened in the beginning of the ride, so maybe he learned how to compensate for the treads after a few minutes.  Once he has warmed up, Harley carries himself better, too, which gives his front end more time to stay out of his hind end's way.

I am excited to give these boots a try on the trail.  I do not see myself letting Harley gallop in them, but I rarely allow Harley to gallop anyway.  There are very few places flat enough and long enough for him to do that around here.  Besides, I think that he had plenty of galloping time in his yahoo days.  I am enjoying the rocking horse canter that he now offers on the trial and this is much healthier for both of us.

I also purchased thin, comfort pads and power straps, but I have not installed either of them yet.  The boots are so snug that I am not even sure if his foot and the pads will fit in the boots together.  All of the other riders at the barn who use the boots also use the pads, but I do not think that Harley needs them.  He is used to walking around without anything on his feet.  Why would he need pads?  What do you think? 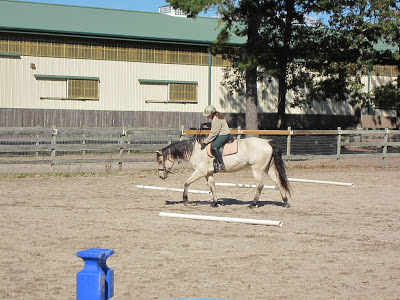