Lungeing in the Rain

Let it rain!  We need the moisture.  Our lawn and flowers were thirsty and I am sure the wells on the farm were thirsty.

Rain does not stop Harley and me.  I like to trim feet on rainy days, especially if the hooves have gotten a little soak.  The rasp cuts through much more easily, reducing the time and effort required for four over-sized pedicures.  Today was not a trimming day, though.  We did a fair amount of sitting trot and canter work yesterday, so I wanted to give his back a rest.  Time to lunge!

Harley felt great on the line.  He adjusted his stride to match the trot poles from the very first attempt.  His canter transitions were smart and relaxed.  He cantered from my own body hopping into canter.  I tried taking slow relaxed strides like a large pirouette in the center.  I am happy to report that Harley watched this and slowed his tempo and adopted more self carriage.  I dare say that I was collecting my horse this way.  We both trotted right before the poles.  He did not miss a beat, even as the large rain drops spotted his coat.  The left lead was also very nice.  He picked up the outside lead a couple times on the circle, but was attentive enough to drop back to trot and pick up the inside lead before the poles.  His neck carriage was lovely.  I especially liked seeing his eye on me, although once I think he was saying, "I would be dry in my shed right now."  The rain was intermittent at that point, so we really just got a little sprinkle now and then.

We tried a couple different things in both directions.  After some canter-trot transitions over the poles, I let him trot down the long side.  At first, I watched him keep the same stride length, then I tried to ask him to lengthen.  I tried clucking.  I tried tossing the whip a little.  Both of these things did elicit a response from him, but the response was more energy and a faster tempo.  This was a good response, just not exactly what I wanted.  One time he cantered, which I liked, because that meant he was slowing his legs down and adding more energy.  So where did I go from there?  My own steps.  I took bigger steps as he trotted down the long side.  I also tapped the whip in the air in rhythm with his steps.  I think that these things helped, because he did lengthen a little.  I need to return to this, so that I can figure out what I am doing.  Then I can be clear.

After a couple good tries we returned to the circle.  Harley had a nice solid connection to the lunge line.  His neck was probably the most consistent that I have ever seen on the lunge line.  His neck was long from the middle of his shoulders and his poll was released but with an open throatlatch.  I tested the connection by combing the lunge line with my free hand.  I reached forward and took the line and then gently let the line slide through my fingers.  I invited Harley to provide resistance to slide the line through my hand.  He did this happily and this was where I saw the stability of his head and neck.  He was carrying his body as a unit.  His neck was not snaking around to the side or raising with a hollow back.  He will do both these things very quickly, if I chase him with my aids or lose my sense of groundedness or tighten my shoulders against the line.

Harley loves the vibration that travels down the line when I comb the rein or line with my hands.  He seems to like the feel of an elastic rein.  My teacher noted this, the last time we saw her.  He likes there to be a give to the line, but still with a connection.  When I have it right, I can feel his head gently oscillate from side to side as he moves.  I can also feel him swallow or lick his lips.  These little movements send a vibration back to me.  The connection felt so solid that I challenged him to come in to a smaller circle.  I combed the line, but let less slip through my fingers.  I kept a trotting energy in my body and continued to comb the line as he moved around me.  You can do it, Harley.  He was up for the challenge.  He adjusted his strides for the smaller circle and raised his head and neck a little, but kept this nice soft lift in his back.  His steps became springy.  I let the line slide and he returned to a larger circle, stretching his nose to the ground as he trotted.  From time to time the rain fell on us, but we did not care. 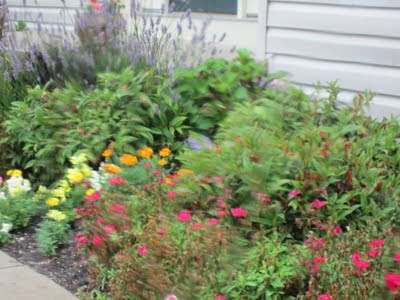